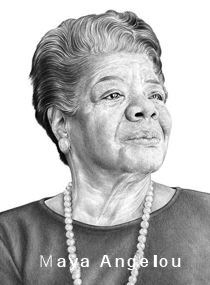 In 1969 Maya Angelou published her first autobiographical work, “I Know Why the Caged Bird Sings”. The book was a coming-of-age story that described Angelou’s character breaking free from being a victim of childhood rape and Southern racism to grow into a self-confident individual with the ability to respond to racism with dignity and to pursue her dreams.

The book was a sensation, nominated for a National Book Award; a fixture on The New York Times paperback bestseller list; a standard text for countless high schools and universities; and the subject of a made-for-TV movie of the same title that aired in 1979. The caged bird, a symbol for the chained slave, endured as a theme through much of Angelou’s writings, as in the final stanza of her poem entitled “Caged Birds”:

“The caged bird sings
with a fearful trill
of things unknown
but longed for still
and his tune is heard
on the distant hill
for the caged bird
sings of freedom.”

“Caged Birds” captures Angelou’s story of breaking free to become whole. That can be your story as well, if you’re willing to break free from duplicity. Be consistent, especially in making sound decisions. And if you make a poor decision, don’t cover it up. To be a person of good character, you have to admit your mistakes and work to rectify them. If you want to live a life of integrity, you have to own your shortcomings and confess them; that’s the best step you can take to overcome them.